I am largely self taught and have been painting and drawing for as long as I can remember. Light plays a significant role in my choice of subject. Landscape work is usually completed on location, with minor adjustments back in the studio. Whatever the subject, working from life is a feature of my art. I gain inspiration from artists such as Streeton, Sargent, Seago, Munnings, Hannaford, Ken Howard, Ken Knight and Howard Morgan.

I have exhibited and sold my paintings through several galleries in Tasmania since the early 90’s. Comments about my exhibitions included this one from Joerg Andersch of “The Saturday Mercury”.

Crossland’s paintings are superb and traditional, but in an easy, loose style with a lovely luminosity rarely seen these days.

Though I work full-time in agriculture, I have continued to focus on both painting and drawing and my art has evolved over the years. I currently sell my work through the Saddlers Court gallery in Richmond, Tasmania.

I have also had a portrait selected and hung in the national Alice Bale Art Award (2007) and have sold numerous commissioned paintings, life drawings and illustrations. 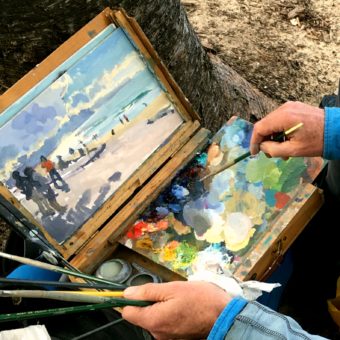